Storage facilities are of great importance for balancing out fluctuating electricity feed-in from fluctuating renewable energies. In the recently completed research project ENERA, which was funded by the German Federal Ministry of Economics and Technology, the IT institute OFFIS has shown how decentralized energy systems can act in this context. One part, coordinated by OFFIS, dealt with the self-organization of energy storage systems and their feeding of electricity into the grid. From bakeries to industrial enterprises, various companies equipped with battery storage systems were sent on a field test to test so-called software agents. “Such software agents can make decisions independently and they can also be controlled very well,” explains Dr. Martin Tröschel, OFFIS co-group leader for “Distributed Artificial Intelligence”, a sub-field of Artificial Intelligence.

Equipped with the guardrails drawn into the software by the OFFIS team, the agents were allowed to decide when the battery storage units would release the charged energy. A key criterion was peak shaving, i.e. the smoothing of load peaks at times of particularly high electricity demand. At such times, feeding electricity into the grid from the storage facility is particularly attractive due to the very high electricity exchange prices. The difference compared to systems commonly used today, which are centrally controlled and trimmed for peak shaving: “The system successfully organized itself completely in the field test. There is no central authority that assigns a schedule to each storage facility, as is the case in virtual power plants,” Tröschel explains.

Co-group leader Stefanie Holly also sees the decentralized mode of operation of the software agents as a major plus and even a necessity for a successful energy turnaround, given the further increase in the number of smaller power generation plants. “Central control units will reach their limits with an increasing number of power generators,” warns the OFFIS expert. For the future, she sees one of the tasks of applied research in taking away the scepticism of electricity managers towards software agents. “Already today, electricity storage systems are attractive for many industrial companies due to the sometimes very high grid fees”, emphasizes the OFFIS expert.

Use storage and heat pumps for optimised use of renewables

Increased regional use of electricity from renewable energies can have a limiting effect on the expansion of the electricity grid and thus on increases in grid fees. Because electricity consumed regionally does not have to be transported over long distances. In addition, electricity consumption is likely to increase in the future due to the demand from e-cars, but also from heat pumps that convert electricity into heating energy. In the recently completed research project “Wind-Solar-Heat Pump Quarter“, also funded by the Federal Ministry of Economics, the Institute for Solar Energy Research Hameln (ISFH) investigated how the share of renewable energies in residential quarters can be increased in various scenarios using thermal and electrical storage systems in conjunction with heat pumps. Two existing residential quarters, one in Lower Saxony, one in Bavaria, were completely measured for this purpose in terms of electricity and heat demand and generation, as well as the yields of solar power systems in the settlements and the yields of wind turbines from the region. “As a result, it was shown that a very high regional degree of coverage with renewable energies can be achieved by a well-chosen operational management, exceeding the mark of 80 percent”, says Dr. Tobias Ohrdes, head of the ISFH working group Electrical Energy Systems. According to the simulations, more than 60 percent of the electricity can be covered directly by wind and photovoltaic power. With battery storage and intelligent control of the heat pumps, a further 20 percent of the electricity demand can be covered locally with wind and sun. If the heat pump operation is coordinated among each other in the whole neighbourhood, the renewable supply increases by another four percentage points compared to an uncoordinated operation. 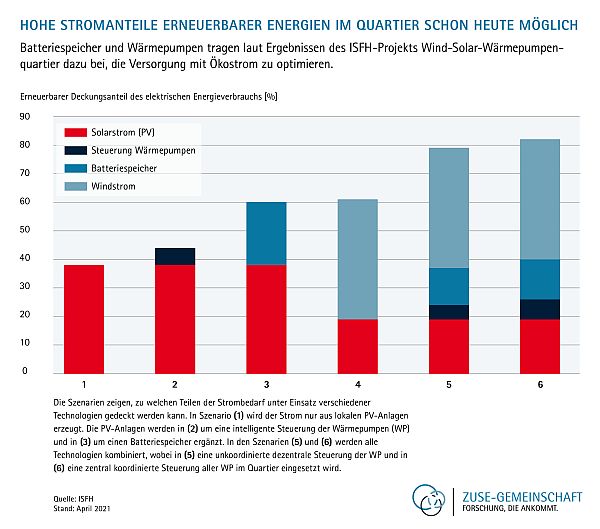 However, the results must take into account the conditions for wind farms, whose electricity is fed directly into the medium-voltage grid depending on the circumstances and is therefore not used per se for regional demand. “The regional use of wind energy is supported by the fact that its generation over the course of the year usually corresponds well with the requirements of heat pumps in buildings,” says Ohrdes. The transition to the electricity market of the future is particularly tangible in the Lower Saxony district of the two neighbourhoods studied, as it is located on the southern slope of the Ohrberg near Hamelin, within sight of the Grohnde nuclear power plant, which will be taken off the grid at the end of this year. Derivatives are now to emerge from the investigations. “We will make recommendations for planners on how best to combine the electricity supply from wind power and solar plants with the demand from heat pumps for residential quarters,” Ohrdes explains and likewise announces: “In cooperation with the Climate Protection and Energy Agency of Lower Saxony, we want to implement five more heat pump quarters and thus bring our research results to bear.”

“The combination of field studies and simulations in the projects of OFFIS and ISFH as well as other projects on the energy transition in the Zuse community shows the importance of digital solutions for the electricity market of the future. With increasing shares of green electricity in the grids, such solutions are gaining in importance,” explains Dr. Klaus Jansen, Managing Director of the Zuse Association. “The successful collaborative projects also demonstrate the importance of efficient funding and cooperation between companies and non-profit industrial research,” Jansen emphasized.